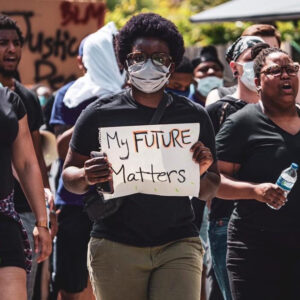 Chimeri Anazia, a senior majoring in kinesiology, wants to inspire and advocate for the next generation.

Motivated by the unjust murders of Black people by police, Anazia uses her voice, her platform on social media, and her art as vehicles to amplify Black voices and fight for racial equity.

Most recently, her “Hands Up, Don’t Shoot” mural, which originally appeared on the plywood covering the windows of Old Photo Specialists in downtown Greensboro last summer, has been put on display as part of the Greensboro History Museum’s “Pieces of Now” exhibit.

Whether children are looking up to her while she is in the streets protesting for equality or holding their hands up to the painted red hands on her mural, she wants them to be reminded that their future matters.

“I’m doing this for the kids, so they don’t have to continue to protest in the future for their right to live without fear in America.”